Spice up your Thanksgiving with these Herbs & Spices

Spice up your Thanksgiving with these Herbs & Spices

The use of herbs and spices in the food preparation of Thanksgiving is very significant. They not only add flavor to the dish but also have a variety of health benefits. Get excited for this fun holiday season by prepping now with these great fall spices! 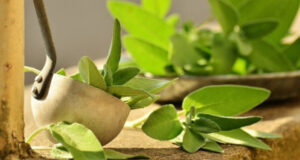 SAGE
Sage is a herb that is prized for its strong herbal aroma and earthy flavor and has a lot of health benefits. It has been known to help people with digestion issues, and also provides relief from symptoms for those who have arthritis and asthma. In terms of Thanksgiving dishes, sage adds flavor to the dressing or stuffing, turkey, or root vegetables like roasted squash. Sprinkling sage on mashed potatoes adds more flavor to the dish without adding calories or salt.

CINNAMON
Cinnamon is an iconic Thanksgiving spice and is known for its distinct aroma and flavor. Cinnamon is used in desserts like pumpkin pie or an apple tart, but also in mashed or glazed sweet potatoes. Whole Cinnamon sticks are even used in the process of cooking down and flavoring cranberry sauce. And don’t hesitate to indulge in Cinnamon flavored dishes, this spice is fairly healthy! Some studies have suggested that the compounds in Cinnamon have antioxidant, anti-inflammatory, antidiabetic, and antimicrobial properties, and that they might offer protection from cancer and cardiovascular disease, among other conditions. However, more evidence is needed to confirm Cinnamon’s benefits.

NUTMEG
Nutmeg is a spice that has been popular all over the world for centuries and just like Cinnamon, the flavor is just as iconic to the holidays and necessary for many dishes. This Thanksgiving, use nutmeg to add some warmth to a vegetable dish, such as carrots. Nutmeg also adds to the sweetness and spice of pumpkin and sweet potato pie filling.

THYME
Thyme, like sage could be used for roasting a turkey. If you enjoy roasted potatoes rather than mashed, thyme is a good flavoring for that as well. Thyme pairs well with green beans, so mix things up by adding it to the traditional green bean casserole. It brings flavor to a fall salad full of your favorite greens, fruits, vegetables and walnuts. Also, thyme is a tasty addition to your Thanksgiving stuffing. 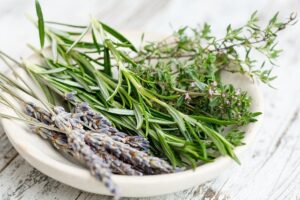 CLOVES
The strong taste of clove, along with cinnamon and nutmeg, brings warmth to classic Thanksgiving desserts like pumpkin pie and bread pudding. It can also be used in savory dishes like chicken and dumpling stew and has been used as a food preservative for centuries. Whole cloves can be used to stud hams, onions and oranges. They should be removed before a dish is served.

ROSEMARY
The pine-like scent and flavor of rosemary helps conjure images of Christmas trees and cozying up to the fire. It adds an astringent, piney aroma to foods. If roasting a turkey with citrus, rosemary is a great pairing. In a sweet sense, rosemary can be used to flavor honey glazed carrots, shortbread cookies, or baked apples. 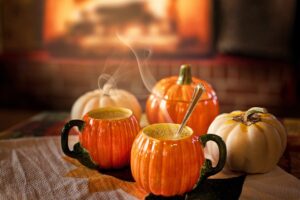 PUMPKIN PIE SPICE
The warm and fragrant scent of Pumpkin Pie Spice dates back to early America. It has become a hallmark of Thanksgiving meals and Fall recipes. Pumpkin Spice typically consists of cinnamon, ginger, nutmeg, allspice and cloves but through the years pumpkin pie recipes have evolved with the addition of spices.

PARSLEY
Parsley is one of the most widely used herb in both the US and Europe! Parsley leaves are high in nutrients including vitamins A, B and C. Here are some ideas for using parsley at Thanksgiving:
Create a ‘rub’ for turkey using parsley in conjunction with sage, rosemary and thyme.
Add chopped parsley to your gravy to perk up the taste.
Use fresh curly-leaf parsley as a garnish on your appetizer platter.
Add parsley along with sage and thyme to stuffing.

BAY LEAVES
They go into stocks and brines and are generally used whole. The leaves are removed after the cooking or marinating process is complete.

Adding a touch of exotic: Using unusual spices in Mixology